I've been posting a lot about Limelight hydrangeas lately, but this blossom caught my eye as I was leaving the Big House today, and just blew me away with its size!  If you click the photo to increase the size, you can see my hand on the left of this SINGLE cluster. 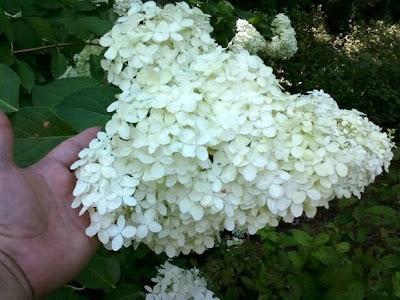 Brugmansia "Betty Marshall" fills the Stepchild Garden with fragrance in the evening. 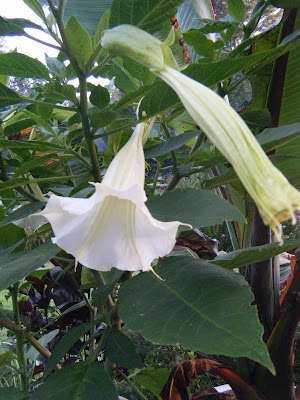 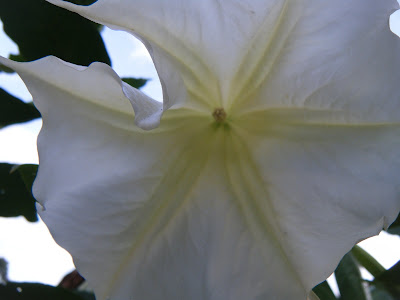 The red Swamp Hibiscus is now blooming, as well. 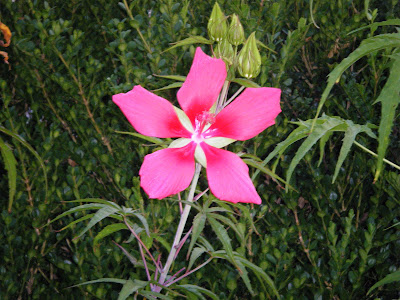 The Sylphium is well over the ten foot mark and still growing! (This is one plant) 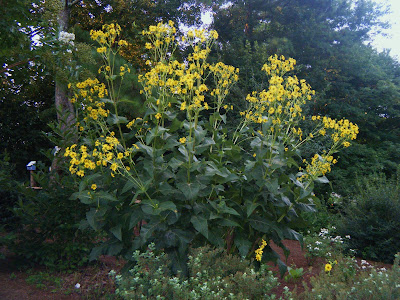 A single bloom on Canna Australis at the Big House 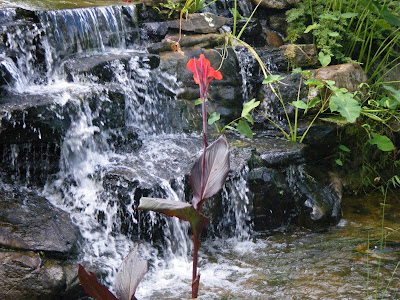 The orchids on "summer holiday" in the woods 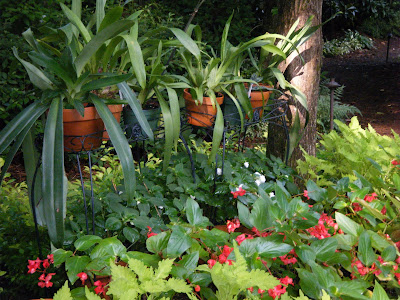 The Limelight hydrangea in the back garden is completely out of control this summer, but who has the heart to cut it when it looks this good? 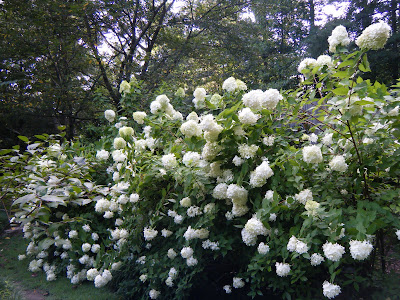 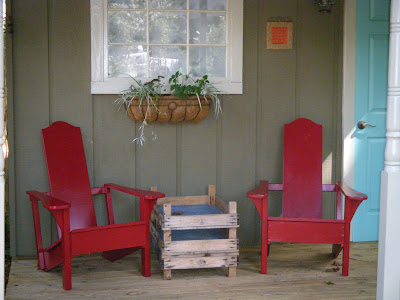 Sometimes I get an idea in my head and I can be rather "persistent" about it (others may say that "obnoxious" is a better word).

Several months ago I saw Dan Benarcik, from Chanticleer, demonstrating the construction of his Adirondack chairs from Chanticleer on Sean Conway's show, Cultivating Life.  It was at that moment that I decided I needed to have THOSE chairs for my not shed.  Many people suggested many absolutely beautiful alternatives, but none were the ones I wanted.

I entered every conceivable phrase into Google to see where I might buy them, I recorded (twice) the episode of the show to make sure I didn't miss any details, and I managed to find an on-line copy of the demonstration, as well.  It was clear I would never be able to buy these.

And then one day my friend Chuck made the (now infamous) mistake of saying, "Show me the video, and I'm sure I can make these for your birthday".  Chuck is a rather accomplished woodsmith, and has done lots of the construction around the Stepchild Garden, including the building of the Not Shed.

Well, after a few months of screeching from Chuck's workshop late at night ("Does your new BFF Dan know they don't even sell wood in that size??" "Why don't I just pull measured drawings out of my butt??", "There is no friggin' way that angle is correct!" etc., etc.), as well as some new names for Dan Benarcik and Sean Conway that I can't even publish, combined with Chuck's adamant refusal to give up, the chairs are done.  And they are freakin' perfect!

Wait until he hears what I'm picturing suspended from that old Sweet Gum in the backyard.........
Posted by Unknown at 5:17 PM 15 comments:

The Treasures from Casa Montano

On my last trip to Carlos Montano's studio (just south of Atlanta), I said I would post photos of my purchases once they were hung.  It's been almost two months since that visit, and all of my treasures are still sitting on the bar in the dining room.  As a result, here they are.  Eventually they'll get mounted in their new homes. 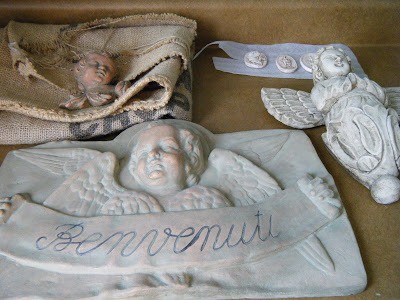 From top left, a little baroque angel's head that is part of a pair; intaglia that Carlos models from the antique marble originals; the "welcome" sign to go above the garage; and an angel that is molded from an original woodcarving from a Guatemalan church.  To give an idea of scale, the welcome sign is 16 by 20.
Posted by Unknown at 9:37 AM 4 comments:

I am one of those gardeners who is very challenged when it comes to keeping a plant alive in the house.  If something comes into my house, you can assume it will die a pretty fast death.  The only thing I have any luck with are forced branches of forsythia or quince living in a vase of water in the dining room, and I believe that's because they are the first signs of spring, and I actually give them some attention.  I don't even want to think about how many orchids, begonias, ferns, and other poor things that I've killed.

I am quite proud of the fact that I have actual living things in the dining room now, though, and they've been there since before Christmas!.....and they're thriving! 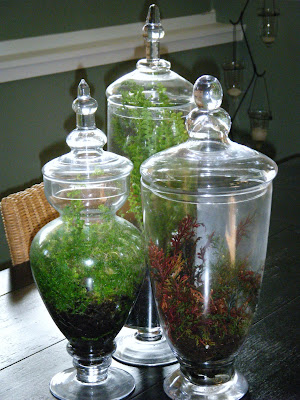 I took this from Sean Conway's book, Cultivating Life,  and so far have had two different spike mosses and one fern doing quite well for several months.  This literally is three glass "terrariums" of a sort from Homegoods, with an inch of charcoal in the bottom, and then the plants stuck in.  It's important that they be in the shade (the first round got "steamed" from light coming in the dining room window).  Once they're planted, they get about a teaspoon of water each, about once a month.  Even I can manage that!
Posted by Unknown at 9:30 AM 4 comments:

The moonvine is one of my favorite flowering plants, for a number of reason.  First, I know of very few flowers that are that incredibly white; second, it seems every moon vine flower I've ever seen has been perfectly formed.  Most importantly, though, they are the perfect symbol (in my opinion) of the sensuality of summer nights in the South.  This is a photo of the moonvine from last summer. 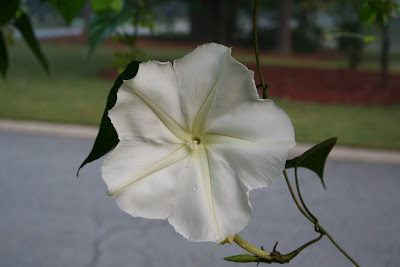 There are many people who can't wait to escape the South in the heat of summer, but I'm not one of them.  To me, there is something magical about the heavy air and even heavier fragrances that one finds in the South at night in the summertime.  The rest of you can have that cool mountain air....give me Charleston or New Orleans in July......

Recently, the moon vine on the front arbor has just taken off, on its way to completely covering the structure with a blanket of green. It's not even showing buds yet, so there's still a long time to wait for those blooms.  Last night I was watering some of the parched things in the Stepchild garden, though, and saw one of those (equally magical) luna moths on the trunk of a sweetgum tree.  In my very vivid imagination, I decided it was resting there until the moonvine blooms, so it can help with pollination. 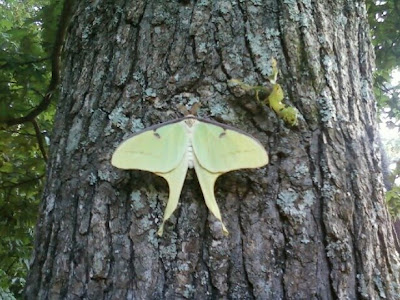 I know that this particular moth is not going to live for more than a week, but I'm enjoying the fantasy.
Posted by Unknown at 4:54 PM 13 comments:

Softening the Look at the Big House

The house where I spend most of my gardening days was built about ten years ago, and the garden is now reaching that mature point  we all so eagerly anticipate; it is also the point, however, when it's time to seriously edit and remove some things that are no longer working.

The interior of the house has a feel that reflects the owners, in that it is a large, gracious, warm house.  For lack of a better phrase, it has a "country French" feel,  and the back of the house is very open to the gardens.

Over the course of time, the plants at the front of the house had really outgrown their usefulness, and had begun to look almost oppressive.  From a practical point, the plants were blocking most of the sunlight from the front rooms.  Last fall we decided to start working at making the front beds more indicative of the home's interior; the intent was to make visitors feel they were approaching an established Southern home, specifically softening the edges.

The overgrown arborvitaes (which were at that point tied to the house to keep them from falling over) came out, as did the sheared holly hedge and the Indian hawthorne (HATE that plant!)  We replaced the cornuta holly hedge along the house with the same hedge ("If it works, why change it?"), but replaced the other hedges with Limelight hydrangea and radican gardenia.  In the process, we allowed the sun to shine on the poor camellia that had been living in complete darkness for ten years!

It's always a stretch to put in dormant plants in fall, trying to envision how it will all flush out in the summer, but I couldn't be happier with how they're progressing.  We accomplished exactly what we set out to do, making the entrance warmer, "fluffier" and softer....and the combation of hydrangeas, crape myrtles and gardenias couldn't get much more Southern.

I probably should have staged these photos from the same spots, but hopefully you'll get the idea.  Here are three "before" shots..... 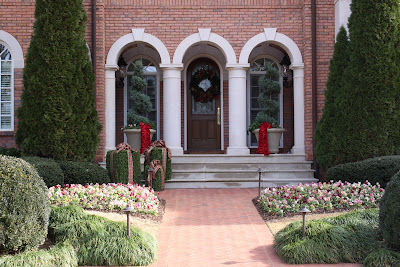 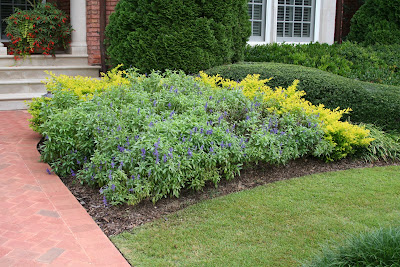 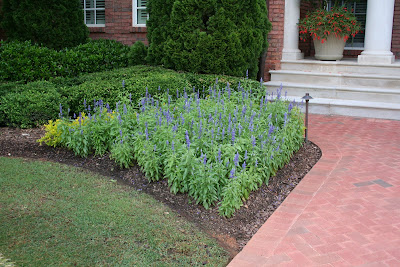 Here are some "after" 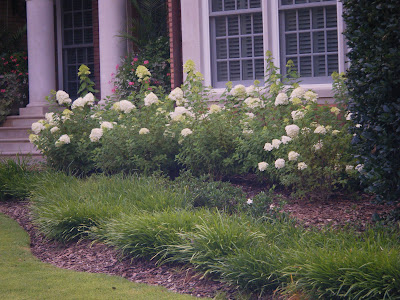 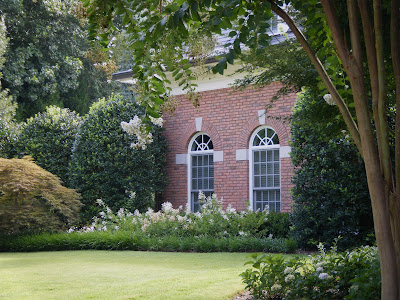 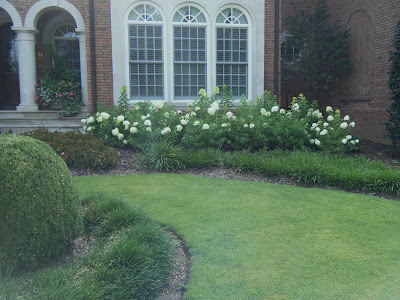 Bramble Ferns in the Stepchild Garden 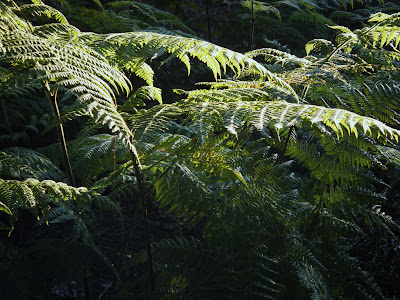 It's hard to believe that it's been a year and a half since I planted these, but they are filling in beautifully!  This area was six plants when I installed them in February 2009.  The Bramble Fern dies back in the winter, but comes back bigger and better than ever as soon as spring arrives.  I love the fact that they are very fine and "fluffy," coming up about 30 inches tall.  More info about the botanical name, etc., in my post of February 18, 2009. 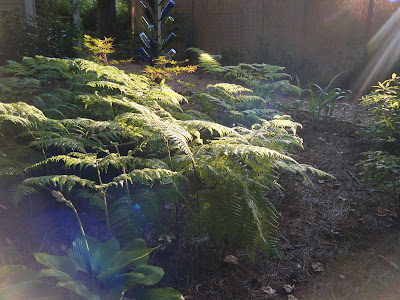 A Few Shots from Oakland Cemtery

It's the time of year when gardens are "resting" in Georgia, so not a lot going on except pruning and trimming.  I have a new appreciation for Russian Sage, lantana and rudbeckia!

I finally had opportunity on Saturday to spend the morning volunteering with lots of others at Historic Oakland Cemetery.  I find that it grounds me and brings me quickly back to the delighful simplicity one can find in the garden.  One can't help but be left breathless by the incredible beauty of the place, in the middle of a not-so-great part of Atlanta.  As always, click on the photos to enlarge (though they were taken with my phone, so not such great quality).

This first one really illustrates the Victorian view of cemeteries as a part of regular life.  How grand to spend the afternoon picnicing near the resting spot of a beloved family member. 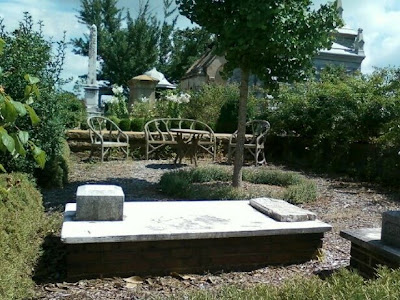 The Austells were clearly a family of some means.....perhaps that's why there is a nearby small city named for them. 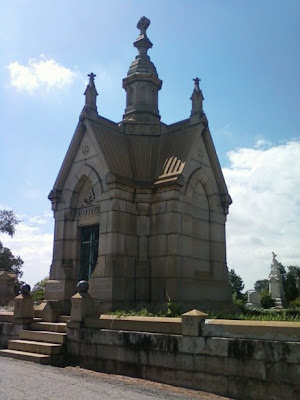 This is a favorite memorial of mine, in honor of a little girl who died very young. 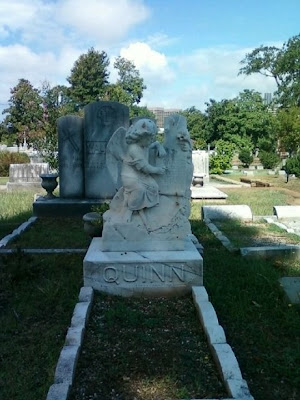 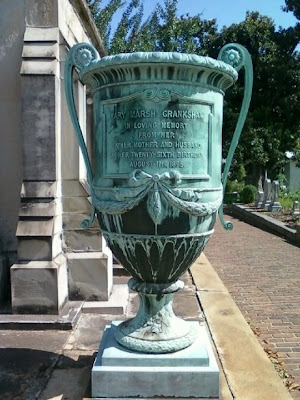 This memorial urn is taller than I am, and one of a pair that flanks the entrance to the family mausoleum.
For more information, go to http://www.oaklandcemetery.com/
Posted by Unknown at 5:10 PM 2 comments:

Weather for July 4th couldn't have been better.  Waking up to a feeling that was "almost chilly," at least by Atlanta standards, made it a treat to get some tidying up done at the Big House.  Mr. thought we were a little crazy to be working on a holiday morning, but after a couple of weeks of 90+ degrees, this was a treat!

The White Border is just starting to show off it's summer color.  The Shastas are up, and just waiting for some of the other plants to fill in. 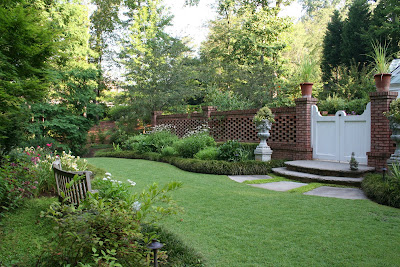 Oakleaf hydrangea "Snowflake" is starting that transition to it's summer color, and will ultimately go to a chocolate brown until we clip the blooms. 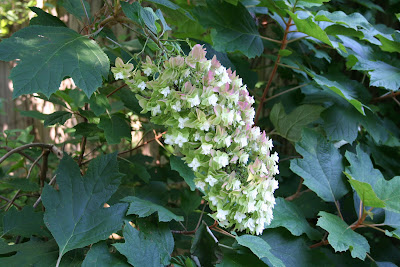 I almost fell into the pond getting this shot of hymenocallis at the edge of the water. 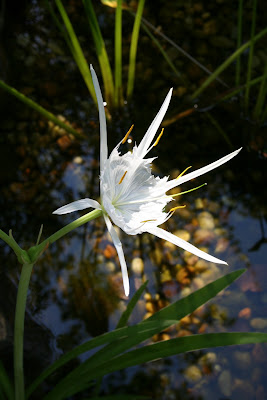 The koi we call "Big Momma" was quite sure that if I was at the pond, it meant it was time for breakfast.  Since she's the size of a whole beef tenderloin with fins, the last thing she needs is another snack! 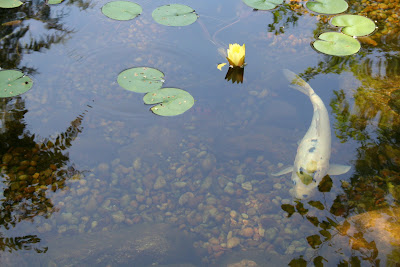 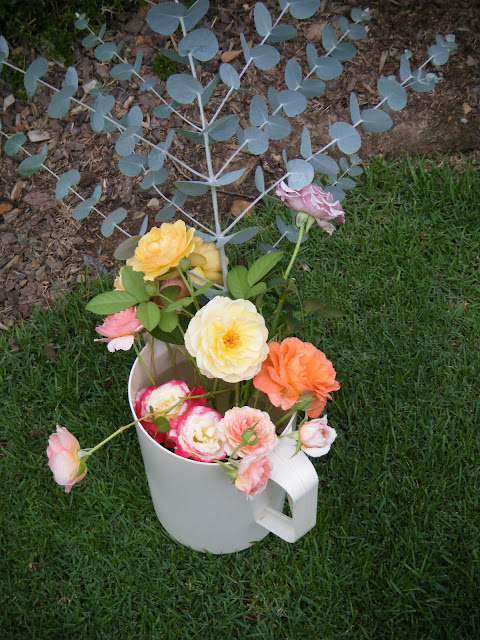 I was cutting roses at the Big House yesterday and thought this casual collection looked pretty great just sitting there on the lawn waiting to be properly arranged in a better container.  Unfortunately I forgot to photograph them once they were  in crystal with some added gomphrena and grasses!  The roses are loving this heat!
Posted by Unknown at 5:31 PM 5 comments: