This has been the perfect morning to grab a cup of coffee and take a little stroll through the Stepchild Garden with Sadie the Dog.  It’s in the mid-50’s at the moment, so there’s lot of residual moisture on the plants, which doesn’t really please Her Majesty, but she loves to just hang out in the sun pretending to be interested in what I’m doing.


Many of the summer perennials are ready to be cut down for the season, but the late bloomers are going crazy with these cool nights and the abundant rain from earlier this week.  Every year at this time I am reminded of that basic plant cycle of  “ grow, bloom, and then collapse.” I was speaking to a Master Gardener group recently and we were discussing the importance of including late blooming plants in the landscape, because they are generally easier to manage.  Since most plants don’t tend to collapse until AFTER they bloom, the autumn bloomers give you great green structure all summer, mightl require the “Chelsea Chop” once or twice during the course of the spring and summer, but generally will still look amazing long after some of the other perennials are reduced to brown sticks. 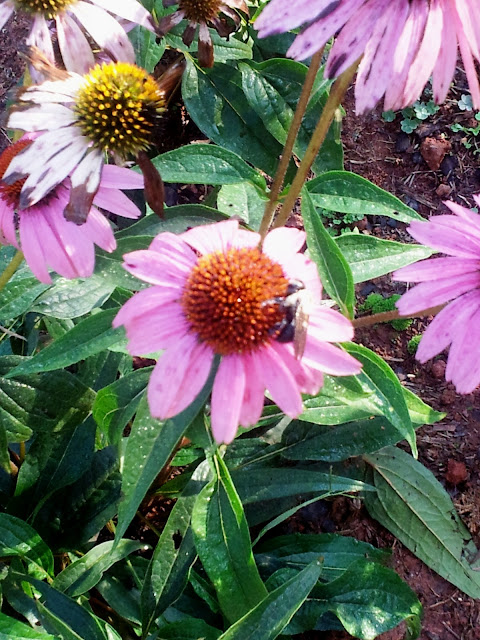 Many people say that gardening in the south doesn’t allow them to mix things like geranium, geum, wallflowers, etc., that can’t tolerate out hot summers.  If looking at it from another angle, we actually get TWO seasons of those flowers in the south.  Walking around this morning, I was amazed at all of the old-fashioned things that have resurfaced after their hot summer hiatus.


Go out and enjoy your garden today.
Posted by Unknown at 10:06 AM